This article will give step-by-step instructions on how to add floating-licensing to your Python app. There's also a full example app that you can download and play with without needing to add licensing to your app.

By the end of this article you'll have working floating-licensing integrated with your application, and thus the ability to sell individual copies of your software.

Before you can do anything, you need to login to your LimeLM account (or sign up). Then download TurboFloat for Windows, macOS, Linux, or BSD. It contains the native library and source code examples needed to integrate floating-licensing in your Python app:

Adding floating licensing to your app 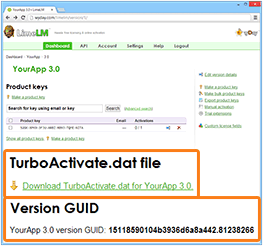 After you've created a new product, go to the version page of the product you will be adding licensing to. You will need to do 2 things:

You'll be including the TurboActivate.dat file in the same folder as the TurboFloat.dll file and you'll use the Version GUID in your code as part of integrating TurboFloat within your app.

We're going to walk you through adding floating licensing to your app by using our Python example application. If you haven't downloaded it already you can get the example app inside the TurboFloat Library package.

We recommend using our hosted TurboFloat Server option because it's fast, stable, up-to-date, and incredibly easy to deploy.

After you've created your account, download the TurboFloat library and extract it anywhere. After you extract it, inside the extracted folder you'll find 2 folders: the "API" directory and the the "bin-*" directory (for example, bin-windows, for the Windows TurboFloat package).

Step 2. Add TurboFloat to your project

Now you need to add TurboFloat to your app. You can do this one of 2 ways, either add "turbofloat" directory from from the "API/Python" project you extracted from the TurboFloat library main package. Or you can install the TurboFloat Python class to be used globally:

Or, to update the downloaded pip package do it like so:

First, create the TurboFloat instance and paste the Version GUID you copied from earlier:

Next, we'll actually request the lease from the TurboFloat Server:

The native TurboFloat library handles all the details about renewing leases, retrying, etc. All you have to do is handle the cases where TurboFloat talks to your app and tells it something has changed (license lease failing to be renewed or new license field data). To do this you need to create the callback function that you set when creating the TurboFloat() object instance:

In the example, notice how we're handling the case where the end-user hasn't already specified the floating license server (the TurboFloatServerError). Instead of just hardcoding the server and port (like we show in the example), you should prompt the user to enter the details. Then you can call the tf.save_server() function to save the details.

You should also give your customers the ability to easily choose using TFS instances hosted on our infrastructure using LicenseChest by simply prompting them to enter the server UUID (a small string that uniquely identifies their TFS instance). Then it's simply a matter of calling tf.save_server() and appending the user-entered UUID to the hosted TFS address like so:

Step 6. Dropping the lease when your app closes

After you've successfully requested a lease from the TurboFloat Server, the TurboFloat library integrated in your app takes care of renewing the leases automatically and silently. You'll only ever get a notification of something going wrong in the callback function that we covered in Step 3.

Testing requesting leases, dropping them, and everything else in the TurboFloat Library is intuitive: just call the function and it does the thing you want it to do. Testing the lease callback function is, however, slightly less intuitive. Here's how you can test the callback function:

You should also test the "TF_CB_LEASE_DROPPED_SLEEP" and "TF_CB_LEASE_REGAINED" callback types. These callbacks are raised when your app has a lease and the device your app is running on goes to sleep and then eventually wakes up. To test these scenarios: