This article will give step-by-step instructions on how to add software licensing (specifically, hardware-locked or node-locked licensing) to your Delphi app. There's also a full example app (one Delphi VCL example and one Delphi FireMonkey example) that you can download and play with without needing to add licensing to your app. The examples apps, and this article, support Delphi 7 and newer.

By the end of this article you'll have working licensing integrated with your application, and thus the ability to sell individual copies of your software.

Before you can do anything, you need to login to your LimeLM account (or sign up). Then download TurboActivate for Windows or macOS. It contains the native library and source code examples needed to integrate hardware-locked licensing in your app:

Step-by-step walkthrough: adding licensing and trials to your Delphi app

Now we're going to walk you through each step you need to take in adding licensing, online activation, and timed-trials to your Delphi app. There are lots of ways you can add licensing to your app, but there are 2 popular styles:

The first method (the separate versions method) is possible with TurboActivate, but we're not going to talk about it here because it's not very user friendly and it requires more work on your end. Instead we'll talk about making your app a hybrid Full/Trial app. That is, your users will be able to use your app in "trial mode" until either the trial expires or they purchase a product key and use it to activate your app.

If you haven't already signed up for LimeLM then sign up now. All plans have a 30-day free trial. Or, if you're just putting your toes in the water, there's even a free plan that has no time limit and doesn't require a credit card.

After you've created your account, download TurboActivate and extract it anywhere. After you extract it you'll find 4 folders:

Step 2. Add TurboActivate to your project 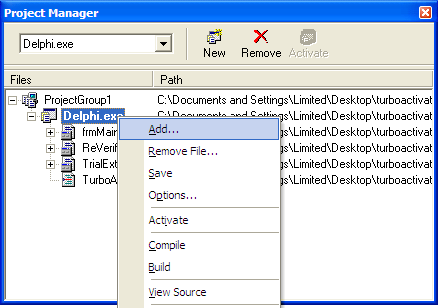 Next we'll copy "TurboActivate.exe" and "TurboActivate.dll" from the x86 folder we extracted. Put these files in both your project's "Debug" and "Release" folders.

If you haven't already created a new product in LimeLM, do it now. You can change any value later, so don't worry about making a mistake. 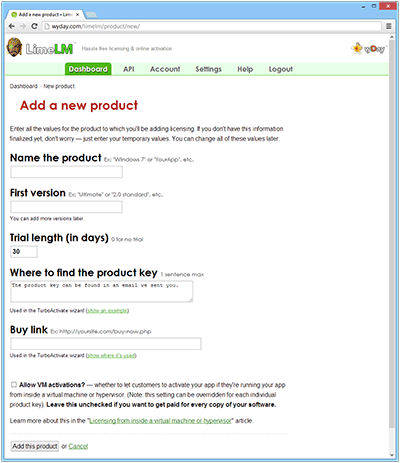 Go to your version page in LimeLM. Download the "TurboActivate.dat" file, and make a note of the Version GUID you see on your product version page (you'll be using it in the next step). 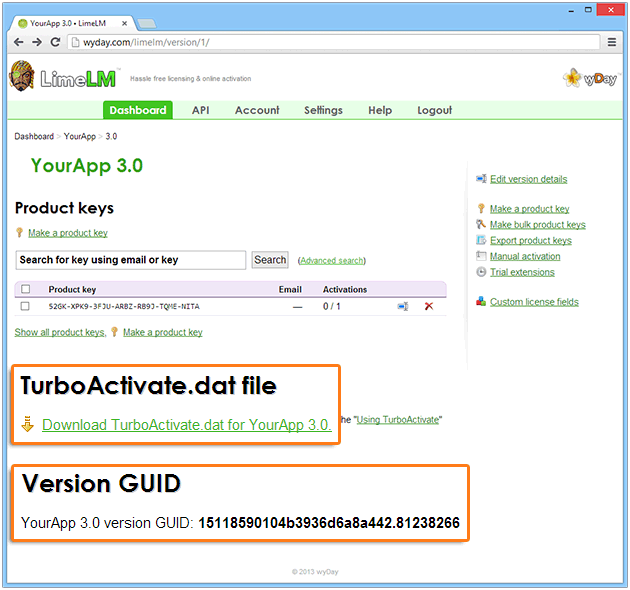 Copy the TurboActivate.dat file you just downloaded to your app's "Release" and "Debug" folders. When you distribute your app to your customers you'll be including this TurboActivate.dat alongside your binary.

Side-note about TurboActivate.dat file: this file is an "information file" about your product version, and gives TurboActivate enough information to verify product keys and cryptographically signed activation data locally. It's a read-only file (license data will never be written to it).

In your Delphi FireMonkey project, click the "Project" menu, then click the "Deployment" menu item. It will open a new tab in the project as shown below: 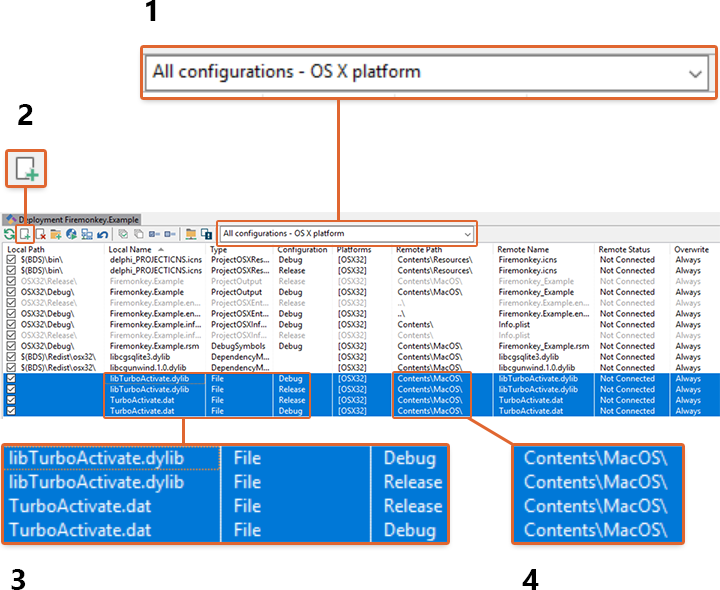 In that "Deployment" tab, do the following:

After doing all those steps you can now debug and release your app on macOS. 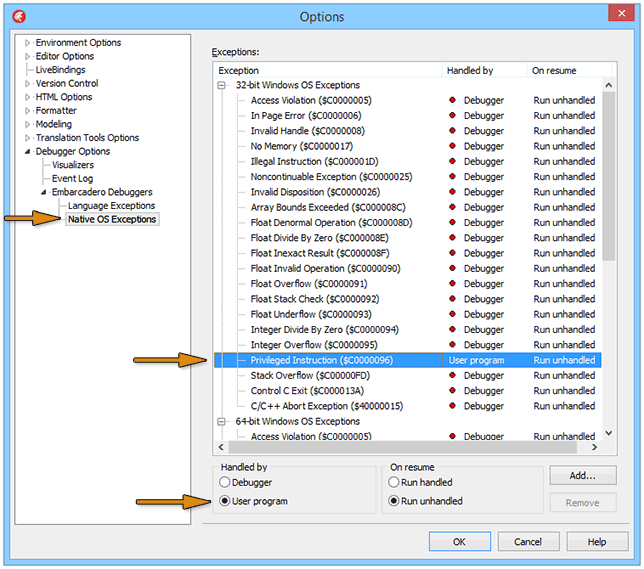 If you don't do this, then when you run your app under the debugger you'll get exceptions that will crash your app. Why? Because the way TurboActivate works is that it throws exceptions and then catches them internally. However, with Delphi's default value of the "Debugger" handling the "Privileged Instruction", the Delphi debugger interrupts TurboActivate's default behavior with no real benefit other than to annoy and confuse you. This is a poor design choice on Embarcadero's part.

First, create the TurboActivate instance as a private member in the class:

Then, in the constructor for the form, you'll actually create the new instance of the TurboFloat class. Paste the Version GUID you copied from earlier:

Step 8. Checking if the customer is genuinely activated

There are many ways you can use TurboActivate to add licensing to your application. For this example we're going to keep it simple.

Scroll up to the "var" section of your main form and add a "Boolean" "isGenuine" variable to save whether the customer is activated and genuine.

And then it's simply a matter of making a call to IsGenuine() to see if the user is activated and to re-verify the activation with the LimeLM servers every 90 days, with a 14 day grace period:

This is a complete example showing how to check if the customer is genuinely activated, and how to handle the error cases. While it's longer than "toy" licensing solutions, it's built for the real world.

The code does the following:

The first thing you need to do is a new Activate/Deactivate menu to your form. You can name it anything you want — in this example we call it mnuActDeact: 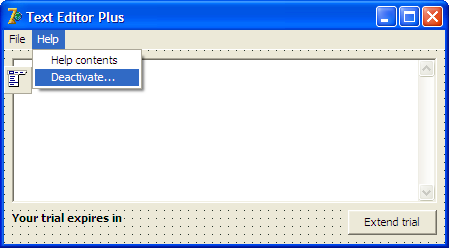 After you've created the menu item, changed the name to mnuActDeact in the properties window, click the "Events" tab, then double click the "OnClick" event and Delphi will automatically generate the event code for you: 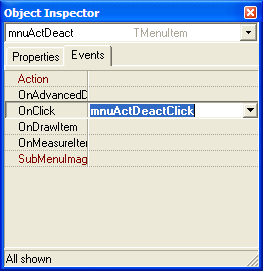 Now we need to handle when the user clicks the Activate/Deactivate menu that you created. Scroll down to the "mnuActDeact_Click" function that Delphi generated for you. You can add code to Deactivate if the user is activated, or launch TurboActivate.exe if the user isn't activated:

In other parts of this example you've seen references to a ShowTrial() function. This is a function that you'll need to create to add trial functionality to your app. In this example we're going to use verified trials (because they are accurate, fast, and allows you to track conversion of customers).

The first step is to actually tell TurboActivate you'll be using verified trials. Create a trialFlags at the top of your main form that will store this information:

Now we have to make a few functions:

In the ShowTrial method you can show how many trial days remain for the user. You can open the Delphi example from TurboActivate.zip if you want to see a full example. Here we'll set the activate menu text to either "Activate" or "Deactivate" and will disable the app features if there are no more trial days remaining:

Now you can add the functions to your code to disable and enable your application features:

In the example Delphi project the app "feature" we enable/disable is the text box. Obviously you need to tailor this to your specific application.

Now that we have the foundation set we can actually start calling these functions. Scroll back up to the form's constructor and add the call to the ShowTrial() function: