This article covers the step-by-step process to releasing updates for your app using wyBuild.

After you've gone through either the video tutorial or the step-by-step walkthrough to integrate wyUpdate and the AutomaticUpdater in your application, you'll need to know the workflow to keeping your users up-to-date.

There are a few steps to releasing a new version to your users. For this example, let's assume your new version is version "1.2":

Note: There are several different target folders within wyBuild. The one most people will use is the "Your program's folder". This folder corresponds to the folder where the "wyUpdate.exe" and "client.wyc" files are sitting on your customer's computer (i.e. in your app's base directory). This way you don't need to hard code your application paths.

Step 2: Re-build wyUpdate if you're making an installer for the new version

You should not include wyUpdate.exe in your updates — wyUpdate self-updates. The client.wyc file, however, can be included with your updates if you want to.

Simply click the "Build updates" button and wyBuild will dynamically scan your files and build the update patches.

Step 4: Upload the updates to your server

Click the "Upload updates" button to upload your newly created update files. Now your users will be able to update to the new version of your app. 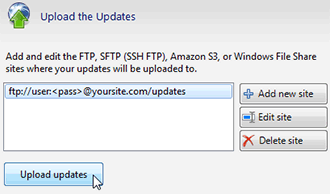 When you're building your installer, include all of your app files and folders along with the newly re-built "wyUpdate.exe" and "client.wyc" for version 1.2 of your app.